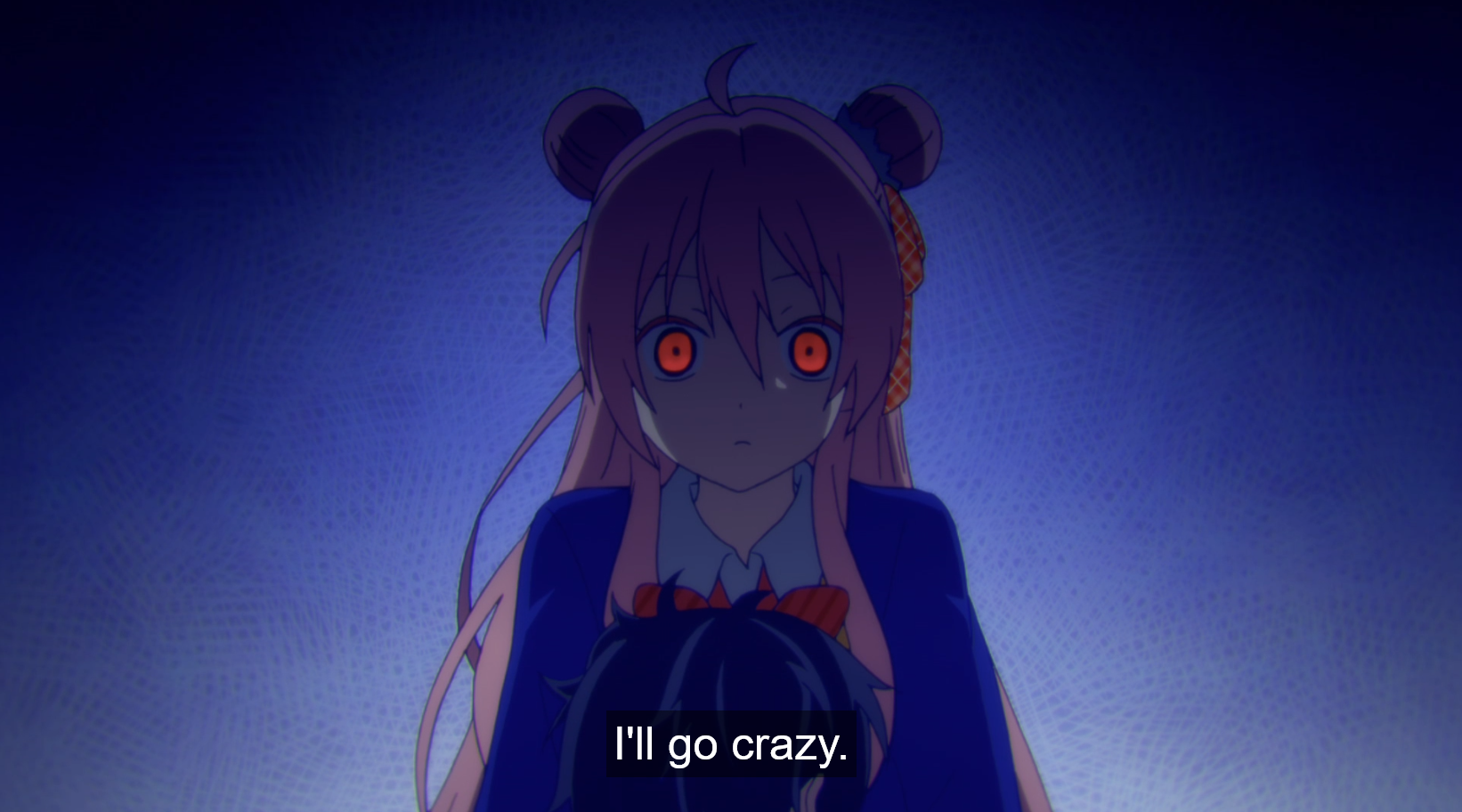 We’re about 5 weeks into the season and here are my top 10 picks of the season. Aside from Overlord being what I would take with me while being stranded on a desert island, every other pick is fairly interchangeable depending on your taste. I also have the series I dropped

Salaryman role-playing as an overpowered undead overlord lich accidentally taking over the world–what is there not to love. The sheer amount of care the author puts into developing the world and characters is nothing short of amazing. Watch here.

Holy crap I did not expect to be so into this. It’s a crazy psychological horror/thriller that messes with your mind. While surprisingly there isn’t any guro, the sheer messed up things that go on with each of the characters makes me question my sanity. It’s like i’m staring into tangible madness.. but I can’t stop watching. Watch here.

Everyone loves this series and it’s on track to be best of season for a lot of people. This is basically a really smart anime version of Osmosis Jones. The characters are great, the biology is pretty on point, and every episode something interesting going on. Just don’t lewd the platelets. Watch here.

I absolutely love Chio’s School Road. Every episode takes place along Chio chan’s trek to or from school. The crazy adventures she gets into are always unexpected and it’s hilarious how she reconciles her inner monologue with her actions towards other people. This will probably be my best of season. Watch here.

How Not to Summon a Demon Lord

It’s super ecchi. Like Highschool DxD ecchi, and just as high quality. Great characters, lots of plot, and moving moments. You know if you like the ecch so if you do, this one will not disappoint. Watch here.

3 girls in an all girl school form a club (the Pastimers Club) where they pass the time by playing random games. There is a refreshing “realism” in how the characters act in that they act like terrible people and their antics catch me off guard leading to some laughs. I love the way the art direction changes from pastel moe to dark van gogh cut your ear off style at a moments notice often creating hilarious facial expressions. Watch here.

Another series I did not expect to like so much. This is basically an anime version of Amnesia: Dark Descent. Loli wakes up with amnesia and has to make it up through the different floors of the building to escape. Each floor has a floor guardian wanting to murder her but she has a trusty scythe wielding maniac buddy helping her out. Lots of mystery, some puzzles, some guro, some laughs, much intrigue. Makes me want to play the game. Watch here.

This one is poorly rated by a lot of people, but the key to really enjoying it lies in how relateable it is for you. If it wasn’t for this anime being a straight 100% accurate depiction of my corporate life, it would not be nearly as hilarious. The anime is actually a prequel to Kaiji: Ultimate Survivor, a highly rated anime about a regular dude that progresses through a death game created by a large corporation for their CEO’s entertainment. In this prequel, you explore the trials and tribulations of the manager setting up that death game. Every episode, it’s a fight to manage his staff and cater to the whims of his boss, the CEO. Watch here.

Sports anime about badminton. The animation is amazing, the story is super dramatic (sometimes overly so), and the characters are intense. It’s a great anime for those who want something more serious. Watch here.

Uhhhhh I still don’t fully know what’s going on, but the sheer spectacle is amazing. I think they purposefully try to make the first half of each episode boring to whiplash you with craziness. I think this series would appeal to any theater nerd. You have a prestigious all girls performing arts school, a play that everyone wants to be the star of, and a crazy cirque du soleil battle tournament to see who gets top billing. There is also a magic giraffe. I DON’T EVEN. Watch here.

Phantom in the Twilight

I haven’t dropped this… yet. It has promise–the main chan is like a Belmont from Castlevania, chain whip and all. The hunky guys are nicely color coordinated for viewers with facial blindness. The series just reeks of tween twilight fandom. You have a vampire, who doesn’t really get along with a werewolf, and a bogun/chinese zombie munitions expert–all of which have the hots for main chan. They even call themselves “The Twilights”. That being said, the characters are pretty good, the main chan has initiative and is suprisingly badass at times.

Yuuna and the Haunted Hot Springs

It’s ecchi done badly and boring. Gives the genre a bad name. It’s teetering on along the the edge of being dropped.

Seven Senses of the Reunion

Dropkick On My Devil!!

I really wanted to like this, but it just got too boring and formulaic. Jashin chan does something evil/selfish/bad, gets beat down, rinse and repeat each episode. It’s almost like watching the anime version of the Road Runner. This series seems like it’s trying to be Gabriel Dropout with Jashin chan swapped with Satania, but Satania was likeable and Jashin is trash. Dropped (pun).

It’s basically a story you would find from the young adult romance section of the book store. To be fair, I cannot say this series is more cliche than the comparable harem trash I watch. Just not that interesting to me. Dropped.

This might be good. The score doesn’t reflect that hope, but maybe? All the characters are old edo period Japanese with long names that all look and sound the same. I cannot get into any of the characters, and that leaves the series as just boring. I think I just don’t like old Japanese historical stories–unless the characters are all personified as chans and lolis like in The Ambition of Oda Nobuna and even then it was kind of boring. Dropped.