Hey everyone! I wanted to jump back again and post a Final Fantasy TCG deck profile for everyone today. It has been something I have been working on for a little bit ever since Opus II showed its face. The deck is named The Golden State due to the blue and gold colors of Water and Earth elements aligning with the Golden State Warriors NBA basketball team. Since Tidus is one of the win conditions for this deck and he is also a baller… I felt the deck profile name to be fitting.

Without further delay here is my decklist: 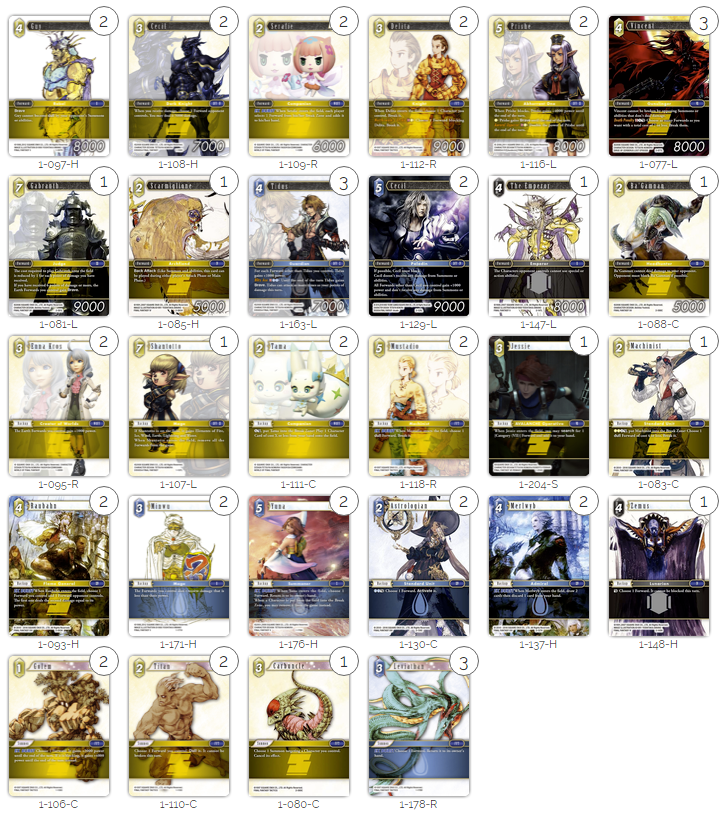 This deck is more of a late game Earth heavy deck that welcomes taking damage. It prefers going second to get more cards to build up. The deck shuts a lot of decks down with a strong wall leaving players in a helpless state. The Emperor, Minwu, Vincent, and Cecil makes a living hell for the opponent.

NOTE: Save Titan and Carbuncle for protecting Tidus when possible.

Okay, let us switch gears and break down some of the questionable card choices I personally made in this deck:

Ba’Gamnan – I chose this card recently to supplement Scarmiglione as it is a low cost card that can deal with some weaknesses to the deck like the unblockable nuisances.

Serafie – I personally love this card, low cost and works as a grave digger with EX Bursting fun! This helps me justify going 2x on many cards whereas I wouldn’t otherwise. This provides the freedom to toss a card early without too much worry. Toss a Gabranth early on and just fetch it later when he matters or more Tidus fuel!

Machinist – Leaving that potential threat as a backup is great. Even more great is that due to Opus II being more punishing to 5 drops, more people play 4 drop power forwards and that becomes game for this card.

Here are some potential cards that ran across my mind when building the deck, but ultimately did not make the cut:

Fusoya (Light) – I was thinking long and hard about this one. I was going to use this coupled with Cecil, Geomancer backups, Dark Knights, and more to utilize the self pain aspect. In the end I wanted to go to the dark side with The Emperor and Zemus instead.

Ultimecia – I could have easily turned Joesephyr’s winning Opus I deck into a Opus II powerhouse, however it would have pushed me to make a more balanced Water/Earth deck pitting in Cloud of Darkness, Ashe, and Fairy in the mix as well.

Larsa – I felt like Minwu is super key to the current deck and easily could have used Larsa as well… just couldn’t fit her in.

Hecatoncheir – Why am I not using this in a format that now has Zemus/Fusoya added to an already hefty and scary backup crew? I just didn’t want dead cards in hand, this could be a dead card in a game.

I hope you like this deck profile! This was a concerted effort from the Final Fantasy TCG US Facebook group, FFTCG Mognet, and FFTCGDB that helped with feedback and input to finalize what I have here. Let me know if you have any questions or comments! Until next time… PSST… isn’t this Tidus action figure sweet?