Recently I have been playing a mobile game called Clash Royale on iOS. I have to admit this game has me pretty addicted and I have been fighting the urge to spend despite my coworkers peer pressuring me daily. This game from what I see is a spender’s game of wallet warriors and RNGesus, but that doesn’t mean you can’t have fun. As much as I wanted to toss my phone a mile away, there has been times where I enjoyed it more than any other mobile game. I wanted to share with everyone my non spender deck which is also immune to the coming nerfs which means it could be that much better than it is now! 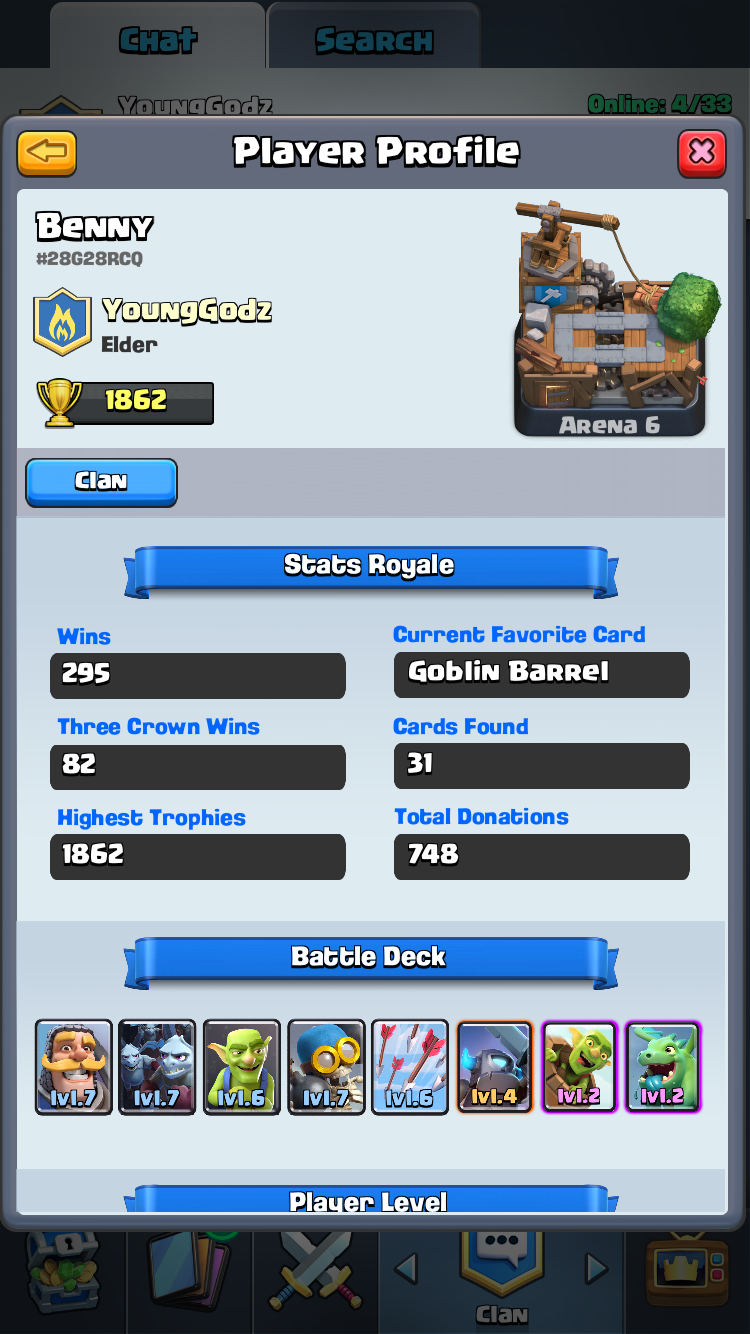 First off I want share some tips for new players before I dive deeper into my deck.

Join a Clan: This is very important… this is how you get cards you need and leveling experience which unfortunately does matter. Being two levels lower than someone in your same Arena sucks balls…

Donate: Any chance you get, donate to your clan members! Even if you need the cards eventually, still donate! This is key for experience and gold! You want to see that you maxed your donations as much as you can! 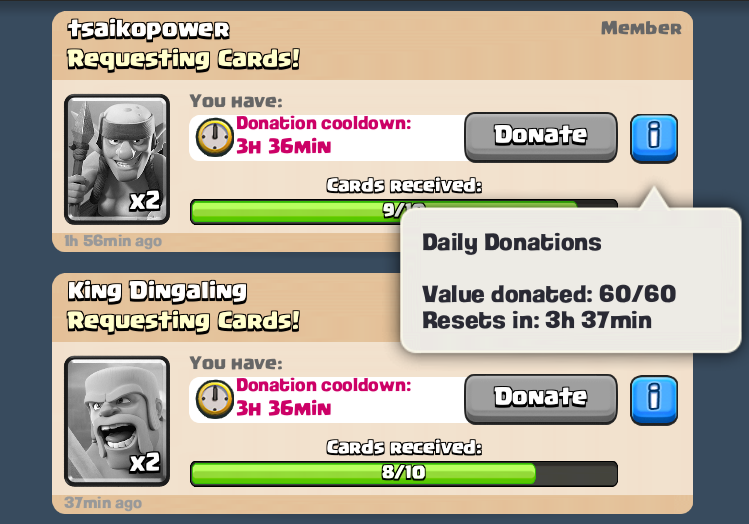 Shop Smart: Always buy commons up to 5 Gold and 1 rare at 40 Gold! The reason is because when you donate these cards, you get 5 Gold for commons and 50 for rares!

Gems: I was impatient and didn’t think I would play this game early on and wasted my gems on reducing Chest timers. Please don’t be like me and save your Gems for Gold to upgrade your cards!

Focus: Don’t just upgrade every card when you can… even though it gives you leveling experience, you should save your gold to focus on your deck cards.

Average Elixir cost: Aiming around 4 Elixir cost is optimal, anything higher you run the risk of not being able to react to counter and anything too low may just get overrun easily.

Watch the Pros: I generally watch how the pros play cards that I do have. As a non spender, you really don’t have access to many cards. Focus on what the pros do with their placement of their troops and when they use them. I find that this helps even though your deck may be completely different! I learned many tricks like dropping a Knight last minute in front of my tower against a Prince and Goblin Barrel baiting.

Below is my Battle Deck: 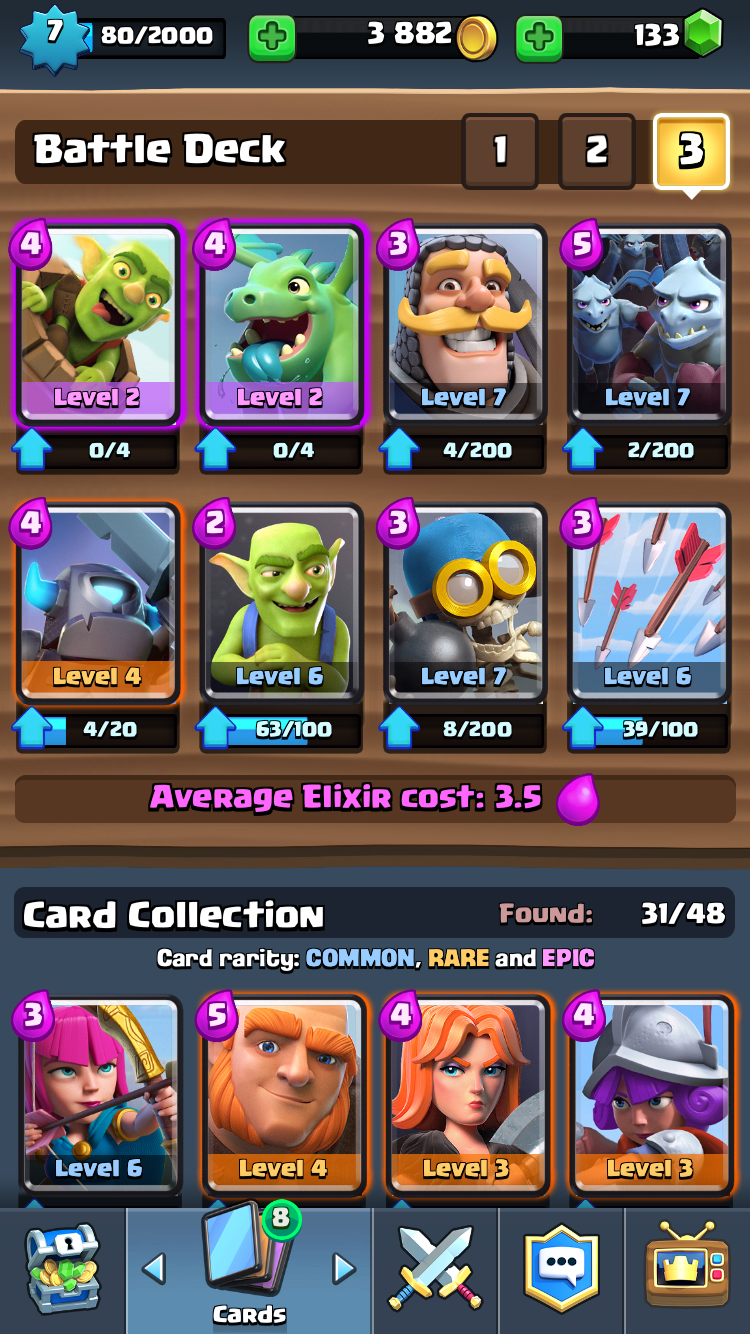 I got to Arena 6 at level 6 with only 29 cards in my collection but it also worked in my favor helping me focus on the only two epics I owned, the Baby Dragon and Goblin Barrel. My clan has been supportive in donations and my coworkers have also been coaching me with tips here and there. Now below is how I use each of the cards in my deck:

Goblin Barrel: This card is usually my finisher in most games. Untouched it can do a good amount of damage to a tower. Most people throw arrows at them immediately as they land so a trick is to toss them slightly further into the corner. Notice below where they prematurely shot their arrows and where my Goblin Barrel landed? 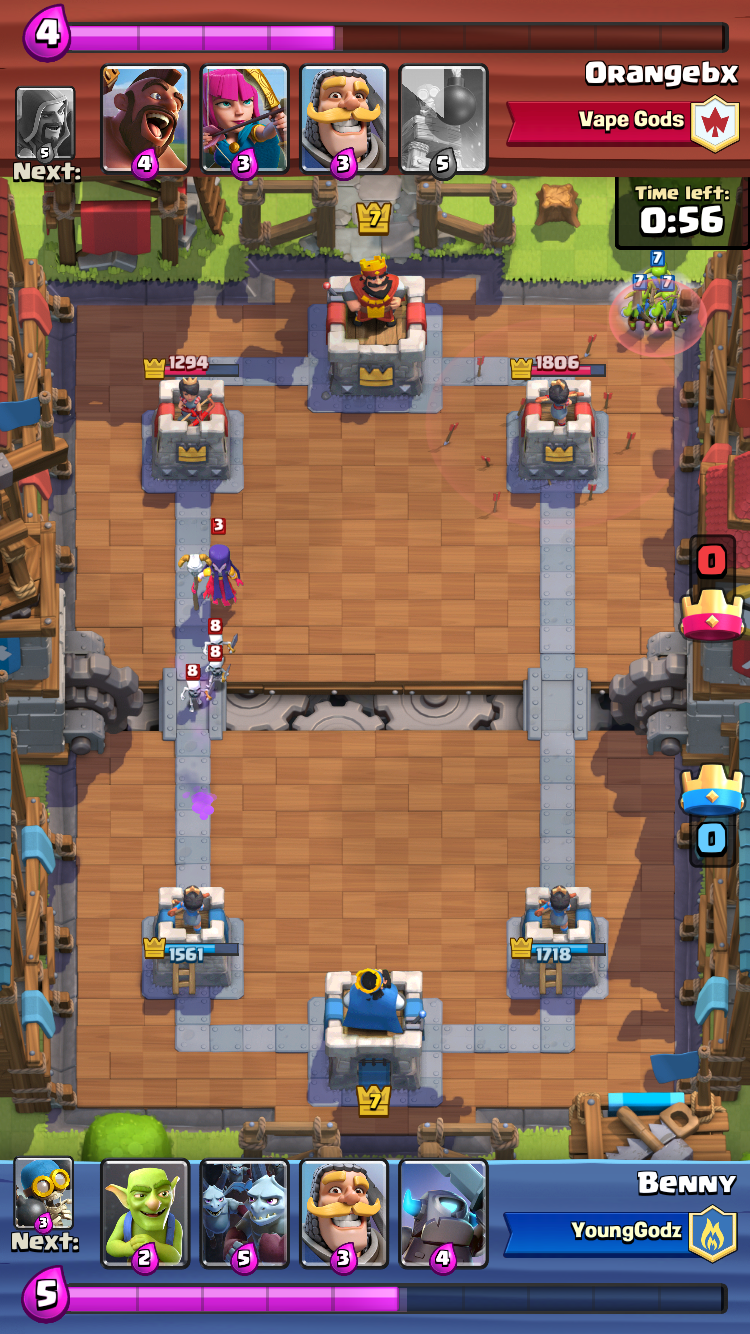 I tend to start many matches with Goblin Barrel to forcefully bait their arrows. You want to normally aim the Goblin Barrel so that it spreads your three Goblins onto three sides of the tower! This way they won’t just die to a Bomber or Valkyrie in one round. It should look like this when you get it perfectly: 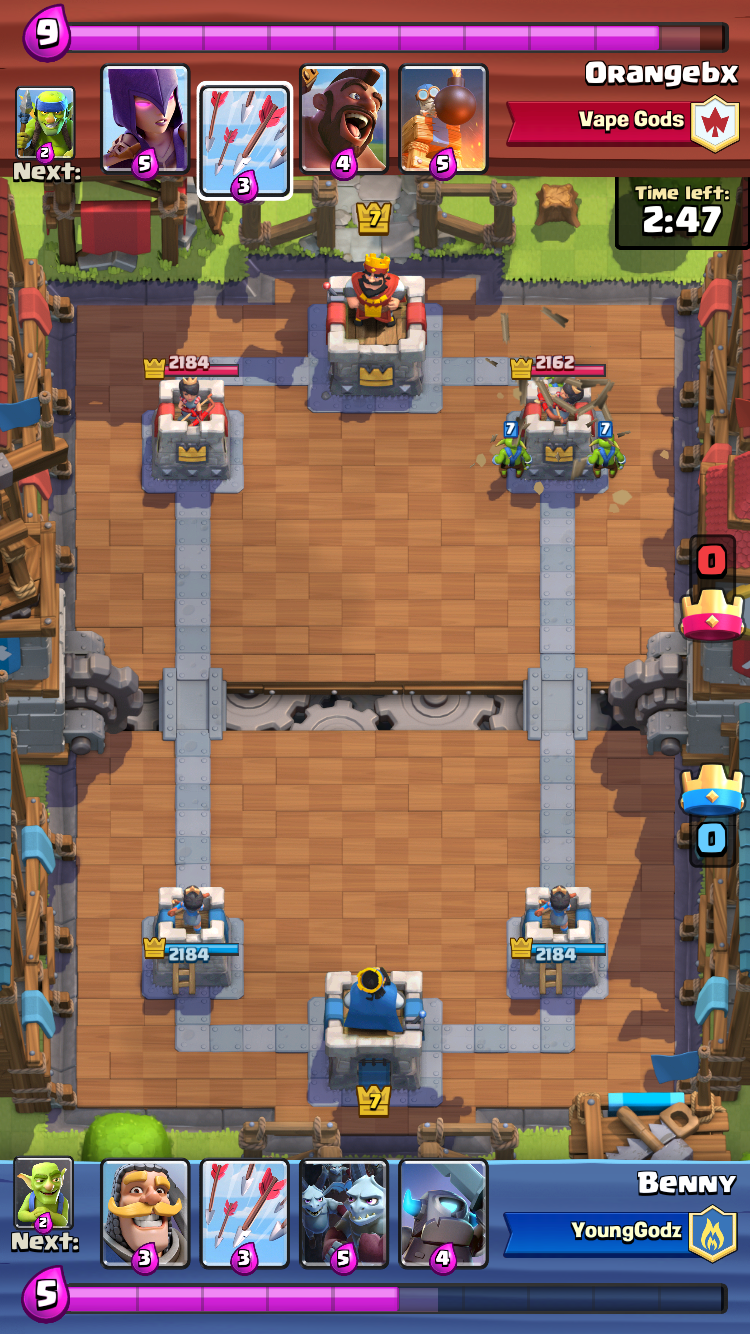 Knight: This guy is my unsung hero. He is my answer to the Prince at 3 elixir. I usually save him for defense and place him directly in front of my tower while a Prince charges at me. This way the Prince cannot charge my tower right after.

Minion Horde: These are normally a target for arrows, but I generally send these out to take out enemy Golems, Giants, and Hog Riders. Occasionally if I see that a player wasted their arrows on my barrel, I will send the Knight with a Horde opposite of what they are sending me. 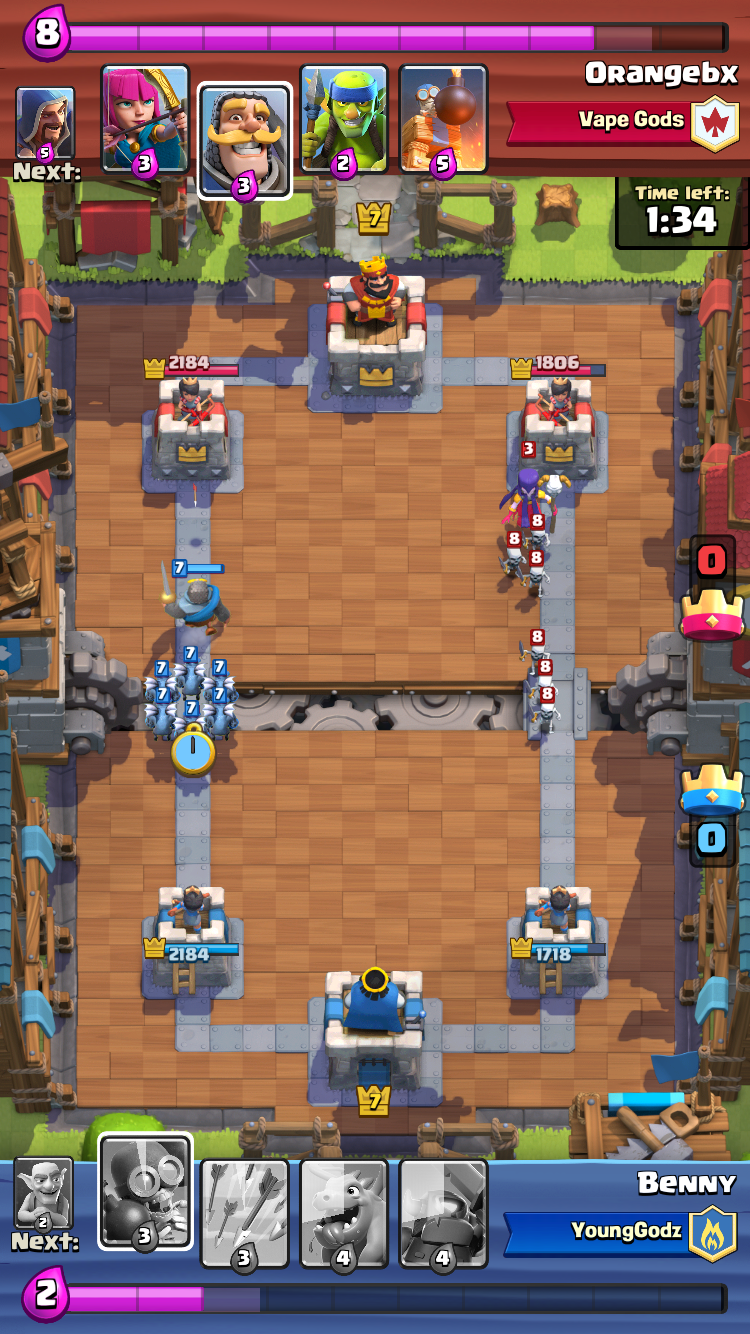 Mini Pekka: This is my ninja assassin. I usually only drop it as a defensive counter to things such as a Giant, Hog Rider, Golem, etc. This is also my Wizard/Witch/Valkyrie/Musketeer, etc counter. Pretty much Mini Pekka is just my answer to everything on the ground.

Goblins: Goblins are also another one of my assassin defensive cards. Rarely do I use Goblins on the offensive as they just get machine gunned down by towers. They help expedite the death of Giants, Hog Riders, Golems, etc. I sometimes kite Barbarians and Princes when them so both my towers can engage on defense.

Bomber: I struggled so much against the Witch and a well executed Skeleton Swarm and my coworker Sam mentioned trying the Bomber. This used to be Minions, but I found the need for a more beefy swarm clear dude. Bombers do a decent amount of damage so I don’t always save him for defense.

Arrows: With players playing Goblin Barrels, Minion Horde, Skeleton Army, and huts… I felt that having Arrows is important both offensively and defensively. At 3 Elixir cost, I find it much more useful than Fireball or Rocket. Gaining 1-2 Elixir advantage over an opponent helps in the long run.

I was thinking for a bit and if you don’t have access to some of these epic cards, it might be worth looking into these changes for Goblin Barrel: (Fireball, Rocket, Hogrider) and Baby Dragon: (Wizard and Minions).

So that is about it! It has been a few weeks since I played this game and I have reached 1862 Trophies with zero money spent as of this writing. Lastly, I wanted to give a quick shoutout to my Yung Godz family, Sam, and Satoshi for coaching and donating me cards that I needed for this deck.

I hope you enjoy my deck and some of my tips and tactics! If you have questions or feedback, feel free to leave them in the comments section below!