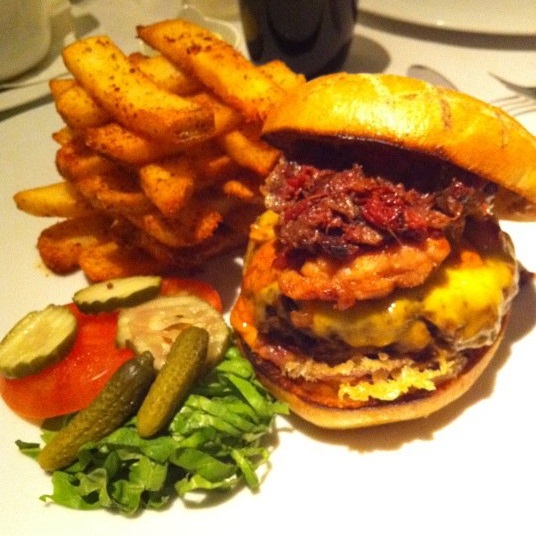 Hey everyone! Another month has passed and another five burgers have been consumed. I am back to give a quick review of the burgers I encountered this month. Most people who know me personally recognize that I eat a lot of burgers. Hamburgers are actually not my favorite food, but I tend to eat it often due to the lower price point. I eat so many different burgers from different places, that I felt it was my duty to share my experiences with them. I plan to share a few burgers from San Francisco each month, or as much as I remember to or have time to! The picture above is a custom burger with beef cheek, sweetbread, and other goodies made by my awesome friend, Kei, at Luce when he was the executive sous chef there. Currently he is in Deerfield Beach, FL as the executive chef for the new Chanson Restaurant so until I fly out to visit him, I won’t be able to taste more awesome burgers from him!

1. Causwells – This was the most hyped up burger from this month’s list. I read many great things about this burger and surprisingly it did not deliver flavor for me. Since my friend ordered the same thing and they brought mine out 10 minutes before my friend’s I ended up sharing half of mine. This allowed me to taste two different preparations of this burger with a total of 4 different patties and sadly… it really tasted like an overpriced Big Mac. It felt like the burger was not seasoned at all and the cheese and lettuce took over the flavor. With the raving reviews that Thrillist gave this burger, I feel like I have to try it again sometime and write this experience off as an anomaly. 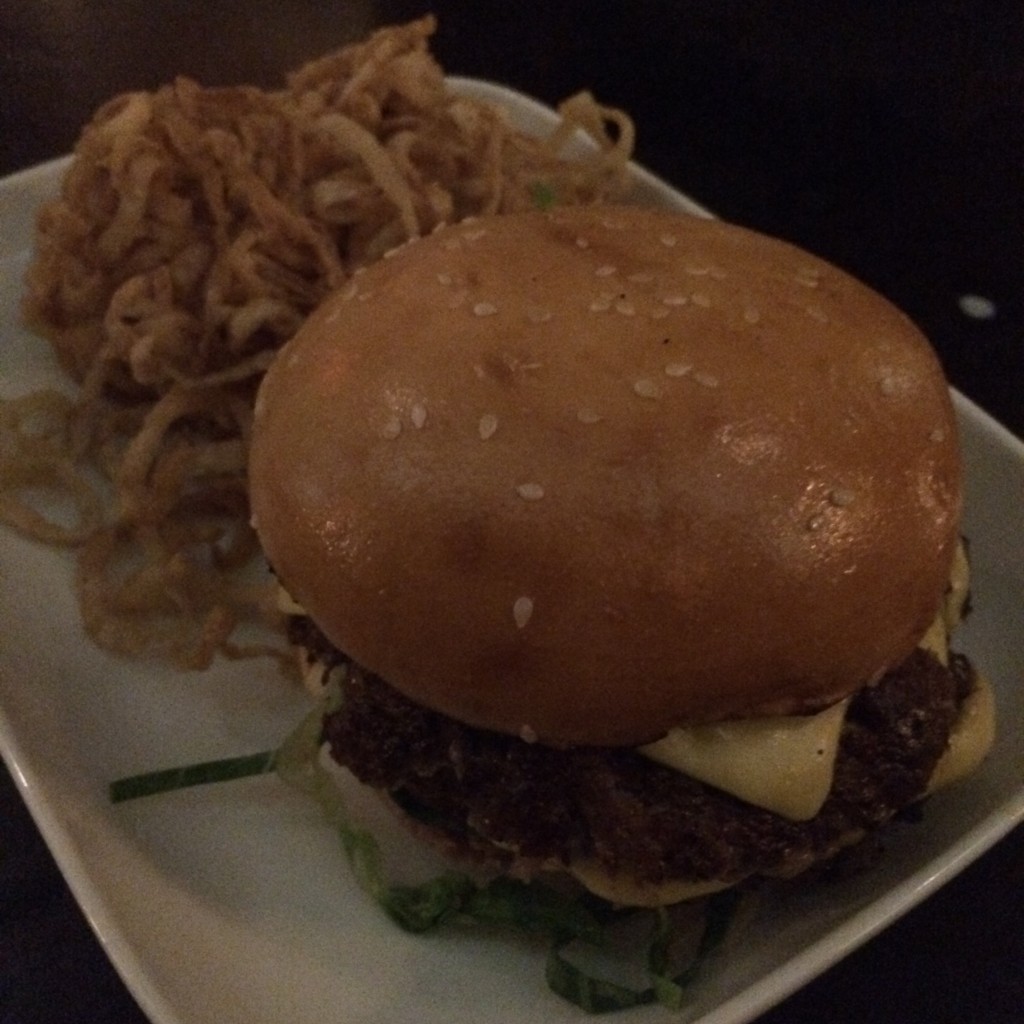 2. Burger Monster – This was one of the rare times that I had a burger outside of San Francisco. I was at BlizzCon 2014 and this was a food truck available to everyone. I ordered the Carnivore which was a pastrami and onion topped burger with strength! For a food truck, this was really good and impressed me. The price was also not alarming as it was $12 for a good amount of content. 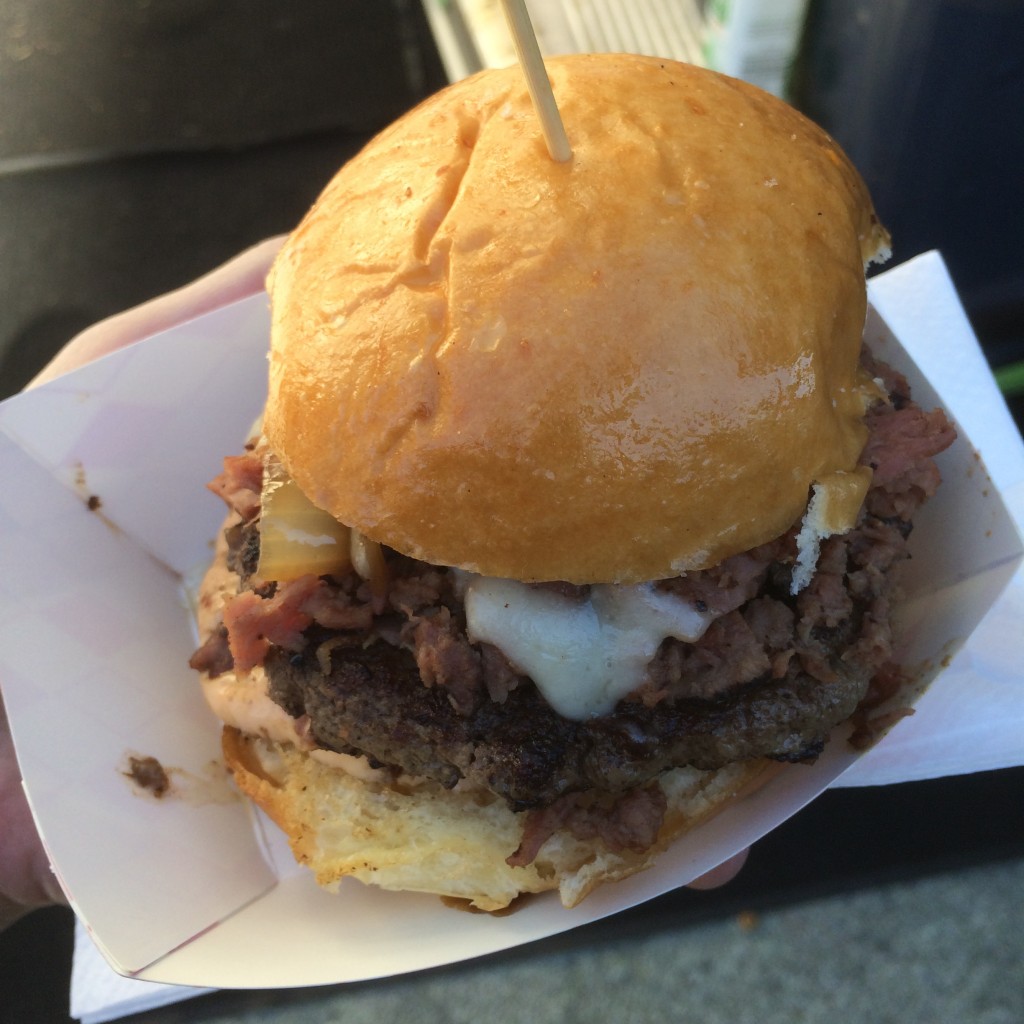 3. Red Dog Restaurant – Red Dog’s house ground classic burger was very interesting as it had a much different bun than any other burger I have had. It almost tasted like a Chinese pancake with a more sponge-like texture. The burger had a great juicy flavor, but the bun was just too overpowering and big. The meat:bun ratio was way off toward the bun and that is the only reason it does not take the trophy. There was also a handicap placed on this burger as it did come via delivery thanks to the good people of Try Caviar. If 4505’s burger can still taste immaculate after a delivery run, there is no excuses for any other burger! 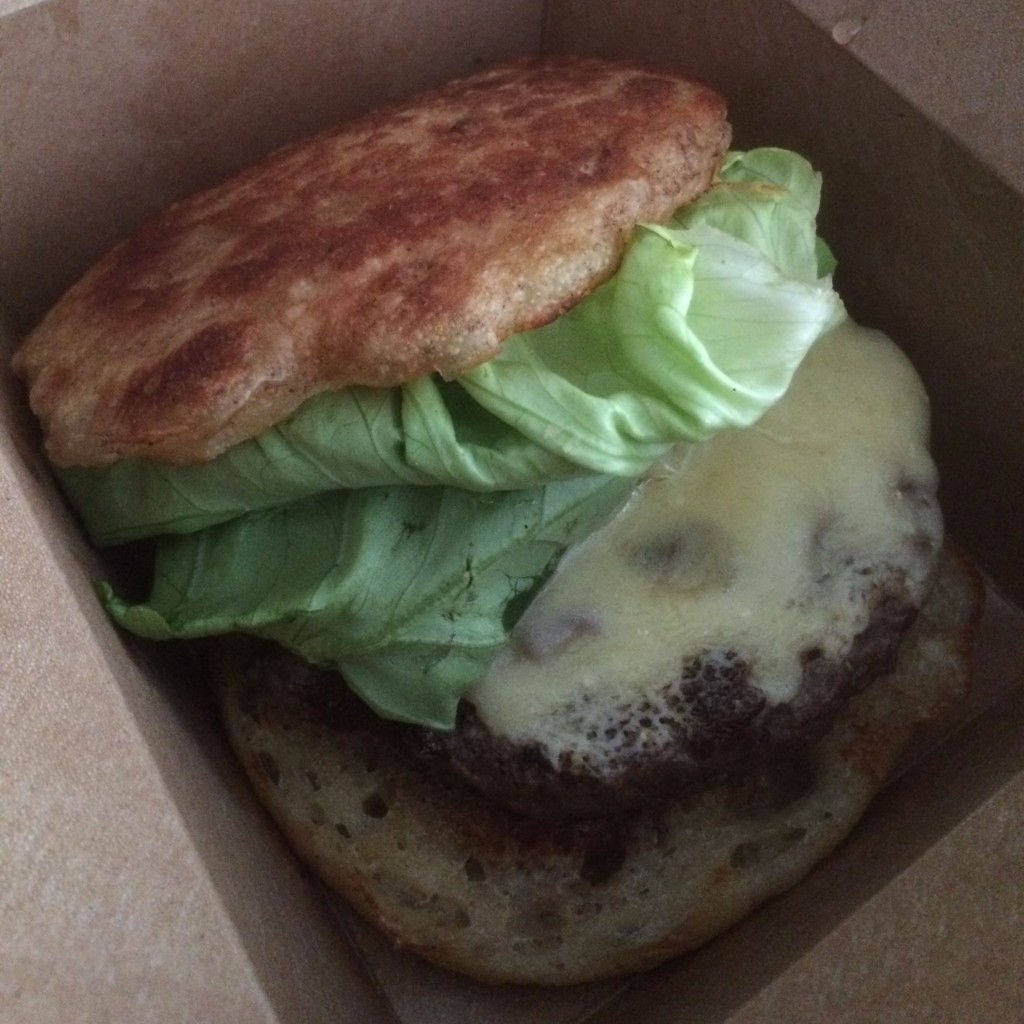 4. The Corner Store – Bacon jam is the only reason this burger wins it this week. The Corner Store Burger utilizes a hefty pain de mie bun that just barely fits the meat:bun ratio, but the aioli and bacon jam shined through to make the burger very juicy and flavorful. Some bites did lack in the flavor punch, but once you get all the sauce and jam it is almost heavenly. The price isn’t bad either at around $13. This was probably the best item on the menu at The Corner Store, so don’t be afraid to try it. 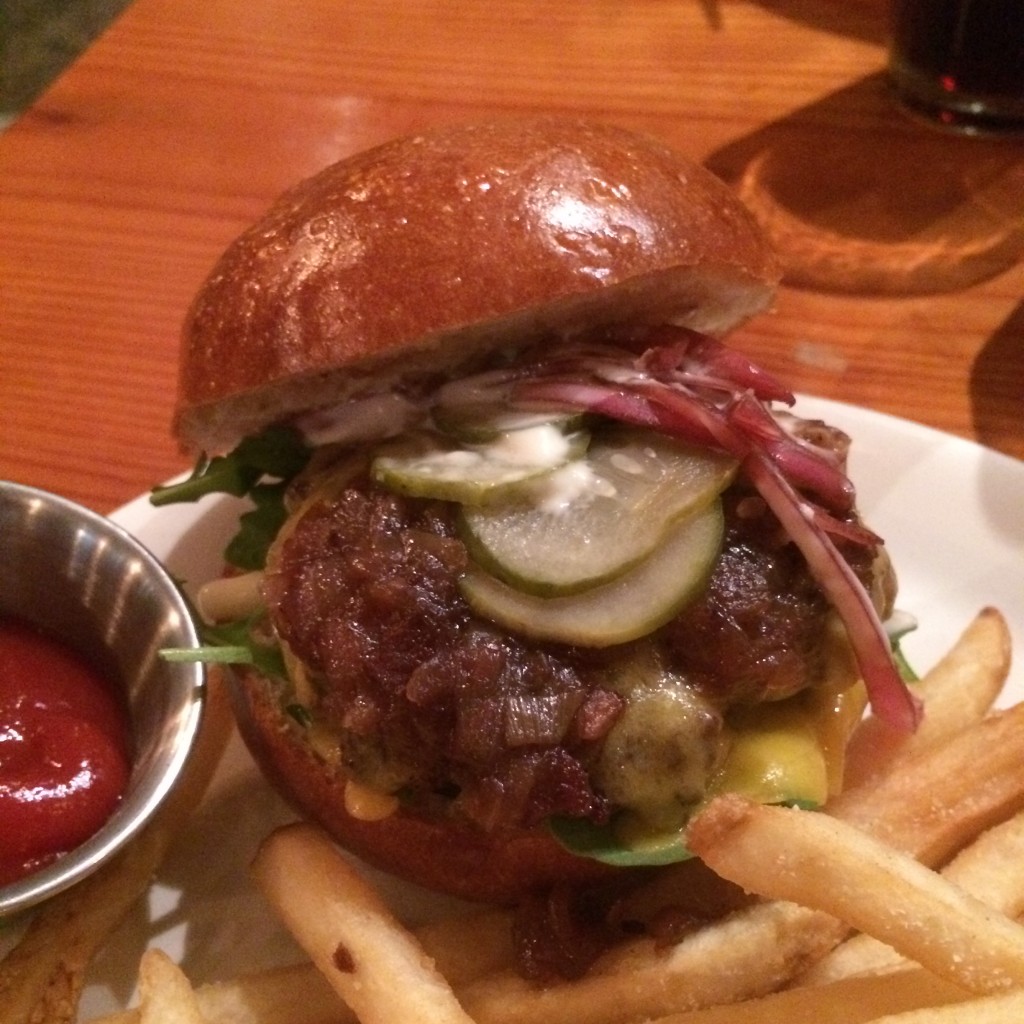 5. Calibur – Off in a place I rarely frequent, West Portal, the burgers at Calibur are not bad. I ordered the 1/3 lb burger cooked medium rare and opted for an egg, cheddar, and bacon while opting out of pickles, lettuce, and tomatoes to keep the burger hot. The toppings came at a 3 for $4 bundle that seemed worthwhile, but also brought the price of the burger to $13+. Calibur’s sauce, as my fiance’s nephew calls it, “It is like hot sauce without the hot.” For me, it was just a weird ketchup that was pretty bland. It doesn’t compare to Super Duper’s sauce at all but has hints of Roam’s Sunnyside burger’s sauce which is actually a good thing. Maybe if some heat was added to the sauce, it would be a clear winner. In short the burger was cooked perfectly but lacked in seasoning. This is a burger joint in which I can see an older Chinese crowd accepting of it since it isn’t too salty. 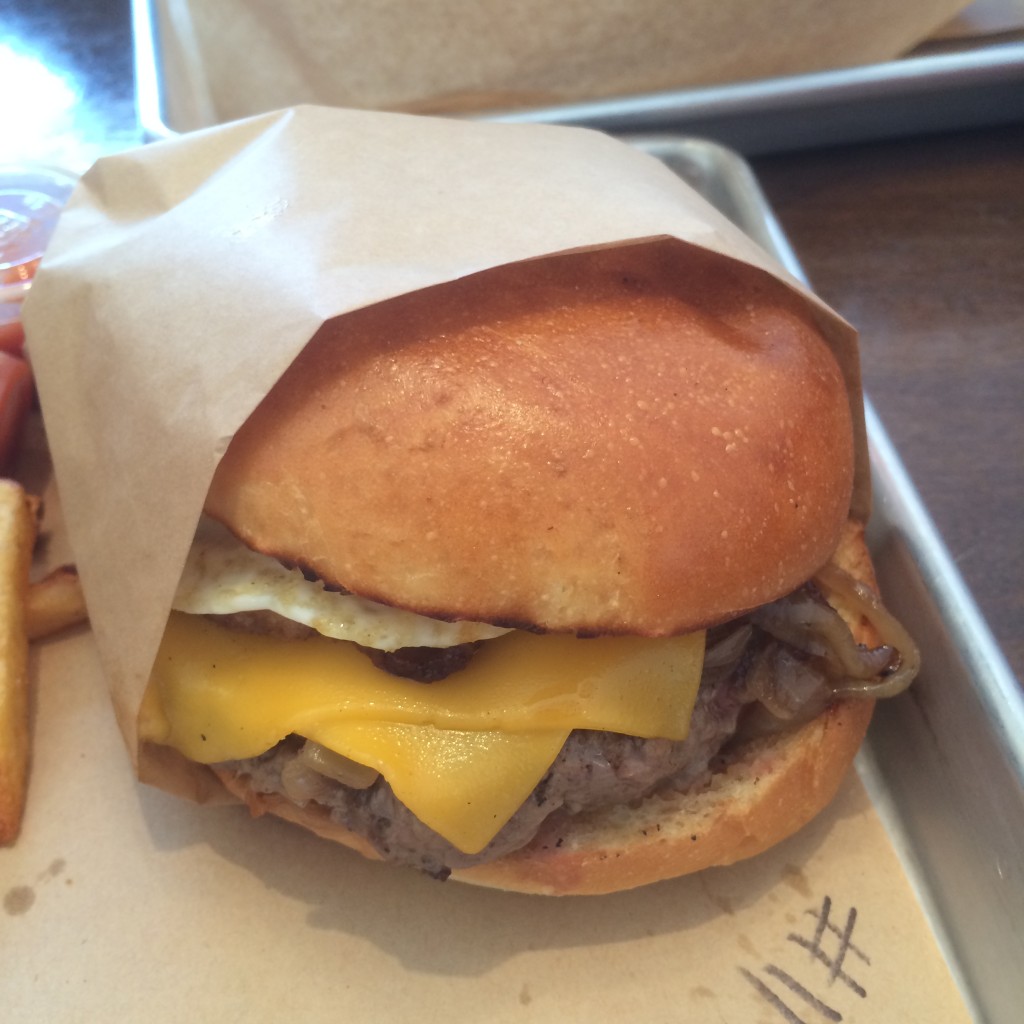 These burgers did not wow me at all this month so the hunt continues. Have you tried any of these burgers? If so do you agree with my thoughts? If you guys have a must try burger spot in San Francisco, let me know and I will try to get in on it to compare it with other places I try. Also, feel free to ask me for suggestions about food places in San Francisco! Check back next month as I will be working in Beijing, China. The Beijing edition of Benny’s Burgers will come just in time for Christmas!