Hey Everyone! I wanted to start a series of posts titled Away Missions. The thought is that anything somewhat nerdy I may do outside of San Francisco would be considered an Away Mission. The first of this series, I would like to bring on the destination that took me 2 years to finally step foot in… Square-Enix’s ARTNIA. 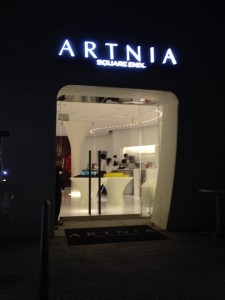 I have previously cursed ARTNIA’s name many a times and have even wrote a tad bit about it here while previewing my plans to visit another Square-Enix cafe, Eorzea Cafe via Pasela. Some of my closest of friends know that I went one day to ARTNIA in 2012 before their official opening date and was denied entry due to my Square-Enix Membership not being a Japanese one. There was a soft opening and only those on the Square-Enix Members Japan guest list were eligible. Sadly, I learned how strict Japan is about their rules and the lack of bending them, which is good and bad. I enjoyed peering through the glass door window watching the lucky people do their thing sipping on their Materia juice and all. That freezing December night, I was determined that one day I would step foot in that facility and embrace the Square-Enix goodness while bathing in the pile of Materia.

Fast forward to February 2015 in Shinjuku, Tokyo, Japan. I realized the hotel I booked at, Granbell Shinjuku, for our Japan stay was conveniently located 5 minutes walking distance from ARTNIA! Coincidence? Fate? Who knows, but I was excited to finally taste that sweet nectar! It was a raining and snowing afternoon in the crisp 32 degrees weather, but that didn’t stop me from reaching my goal! At last I reached the front door… I was finally able to visit ARTNIA!

Walking into the white egg shaped building, I quickly noticed on the walls there was a projection of Bravely Default & Bravely Second. Bravely Second is the sequel to the pretty successful Nintendo 3DS RPG game that deep dives back into the JRPG roots! I still have my collector’s edition sealed and untouched! The video at the top of this post gives a glimpse of the crossover that ARTNIA has with Bravely Second. The white walls were decorated with purchasable merchandise and plush slimes from Dragon Quest series! As I trekked further into the storefront, I was helped by a staff member to a seating area with a menu, towelette, and a badass Seventh Heaven bar napkin. My inner Tifa nerd fandom was itching to crawl out, but I was composed and just focused on ordering. 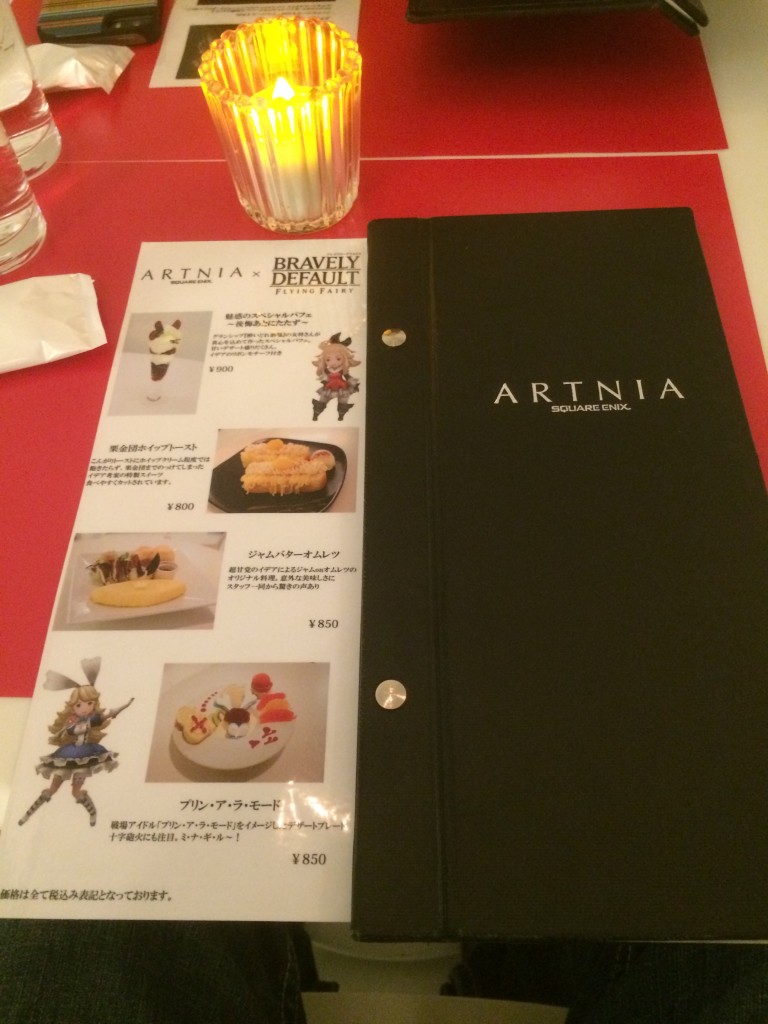 The menu items were rather simple and looked much better in the pictures. I ordered myself a Blue Materia alcohol drink and a Cloud’s Dessert Sundae. My awesome photographer/fiance, Nu, ordered Moogle pancakes for us to share. 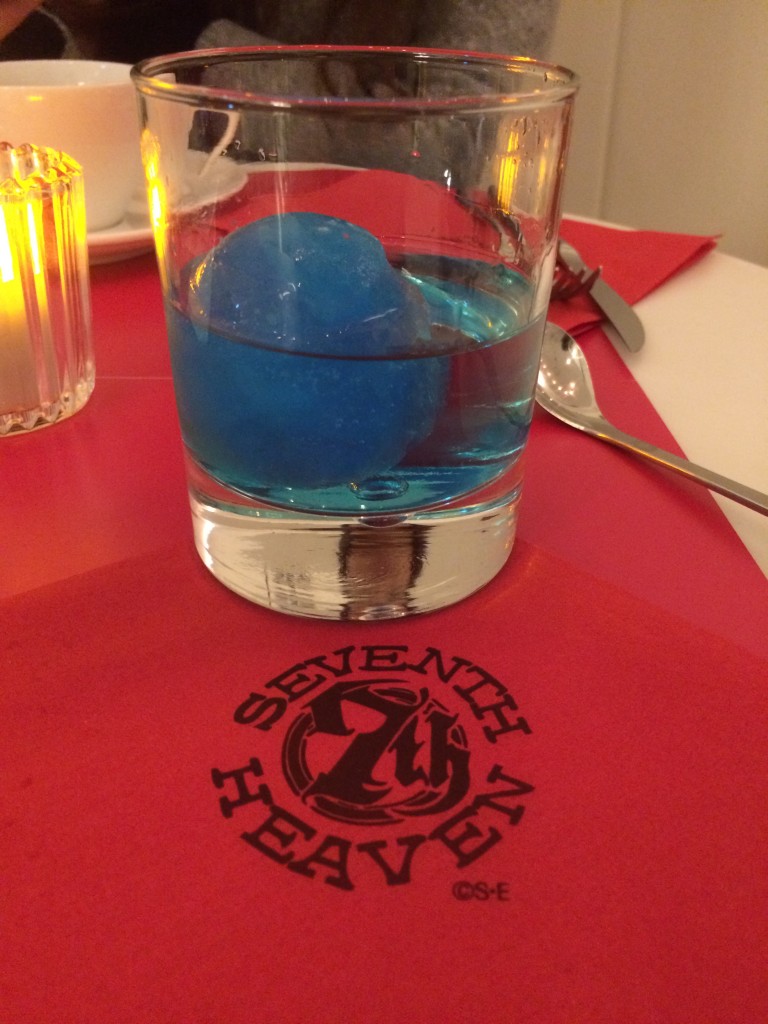 Blue Materia was so nasty, but so pretty at the same time… hard liquor during lunch is not the best idea lol. 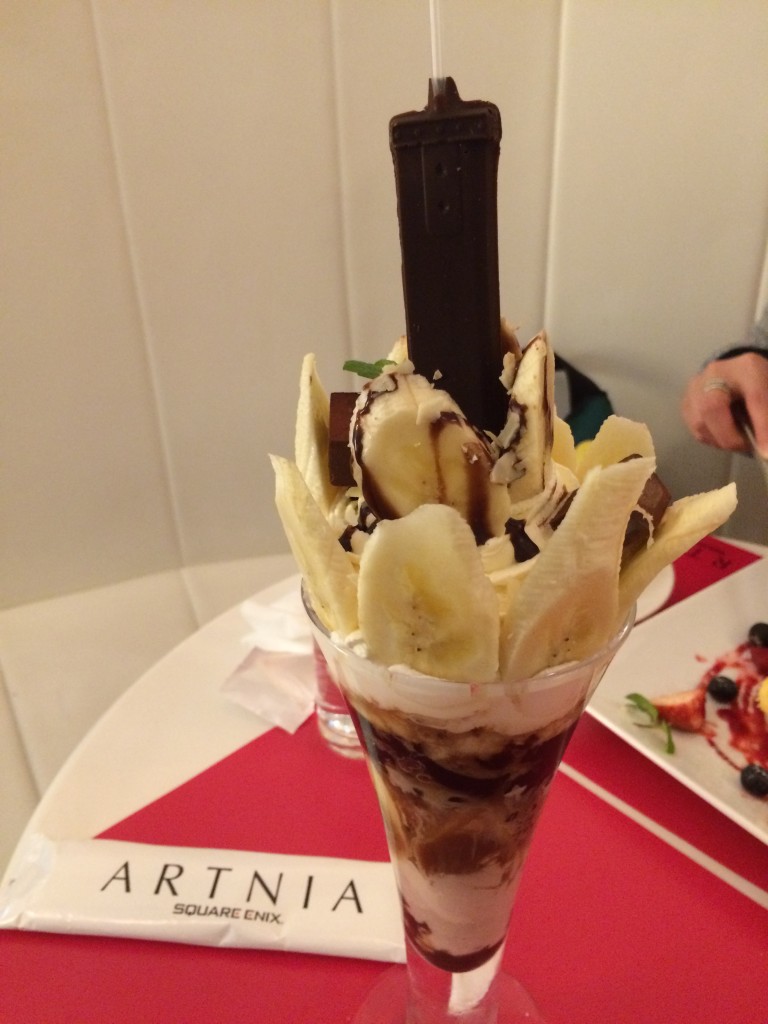 I thought the Cloud Sundae’s sword was a real mini buster sword that I could keep, but instead it was like a plastic straw. 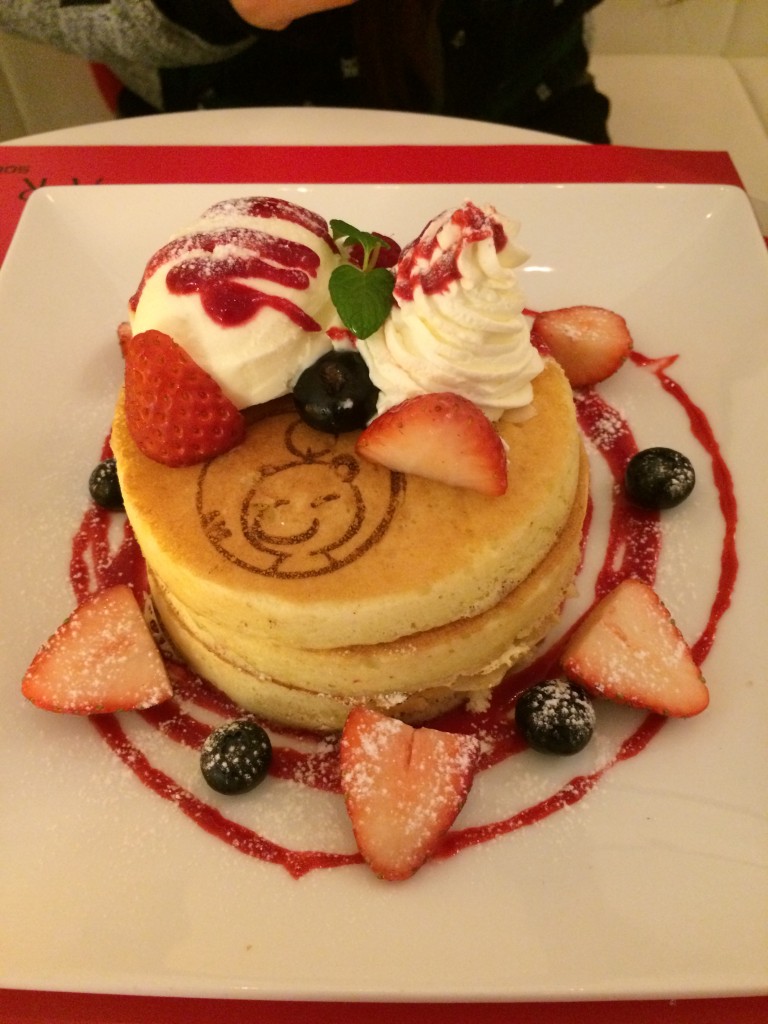 Moogle pancake was pretty awesomely presented. I eat anything with ice cream or moogles on it!

The food looked really nice, but it wasn’t mindbottling or spectacular by any means. I knew ARTNIA was more of a tourist attraction more than a gourmet dessert cafe so I set my food expectation bar real low. After finishing our food we decided to take a deeper dive into the merchandise to see if there was anything worthwhile to take back as a gift. Majority of the product were related to Bravely Default and Dragon Quest which made me a tad bit sad since I was more of a Final Fantasy series fan. Many of the items were not exclusive to ARTNIA and could be found on the Square-Enix online shop or even at conventions where Square-Enix sets up shop like San Diego Comic-Con or Jump Festa in Japan. Below is a quick example of the merchandise that was offered: 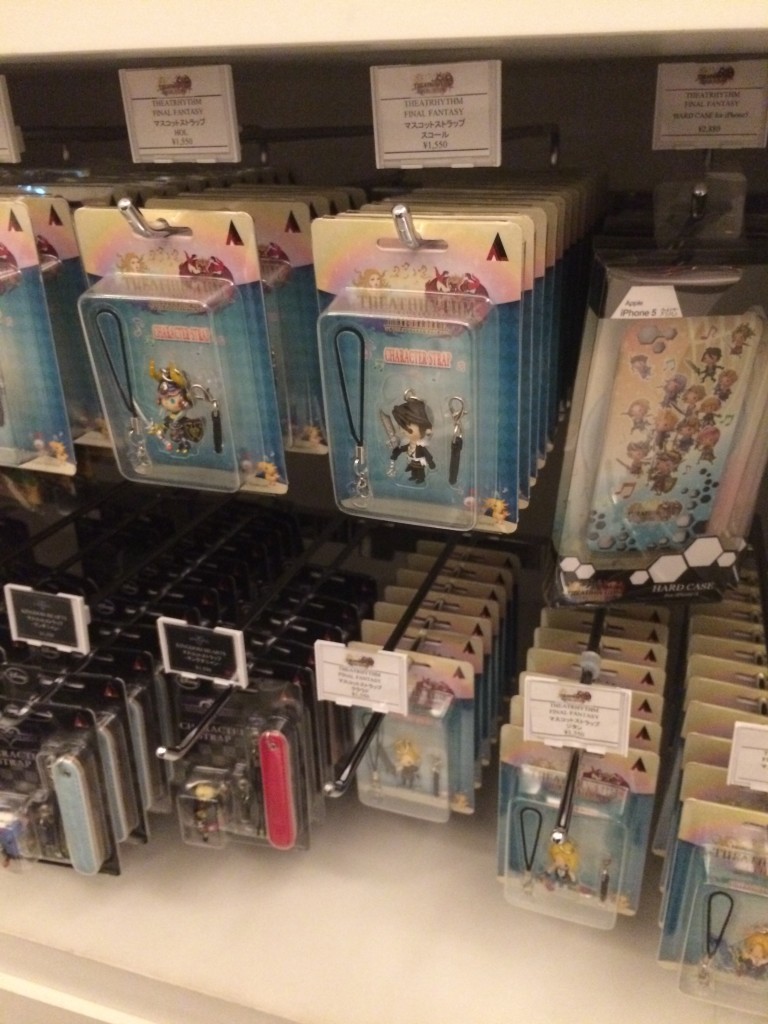 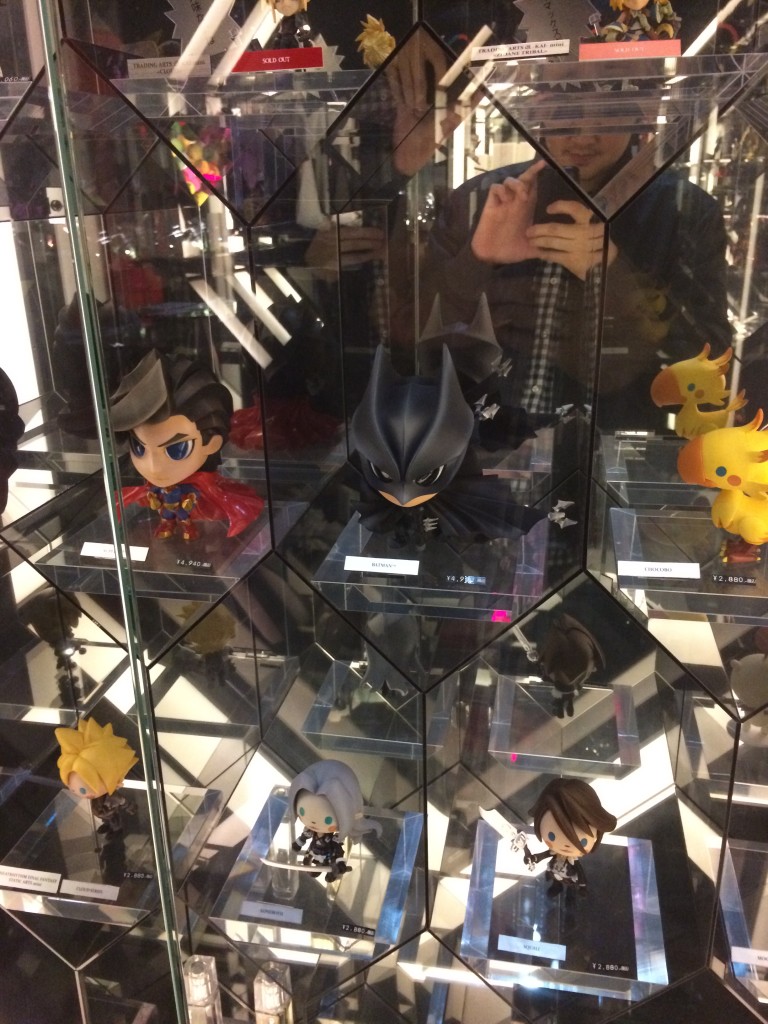 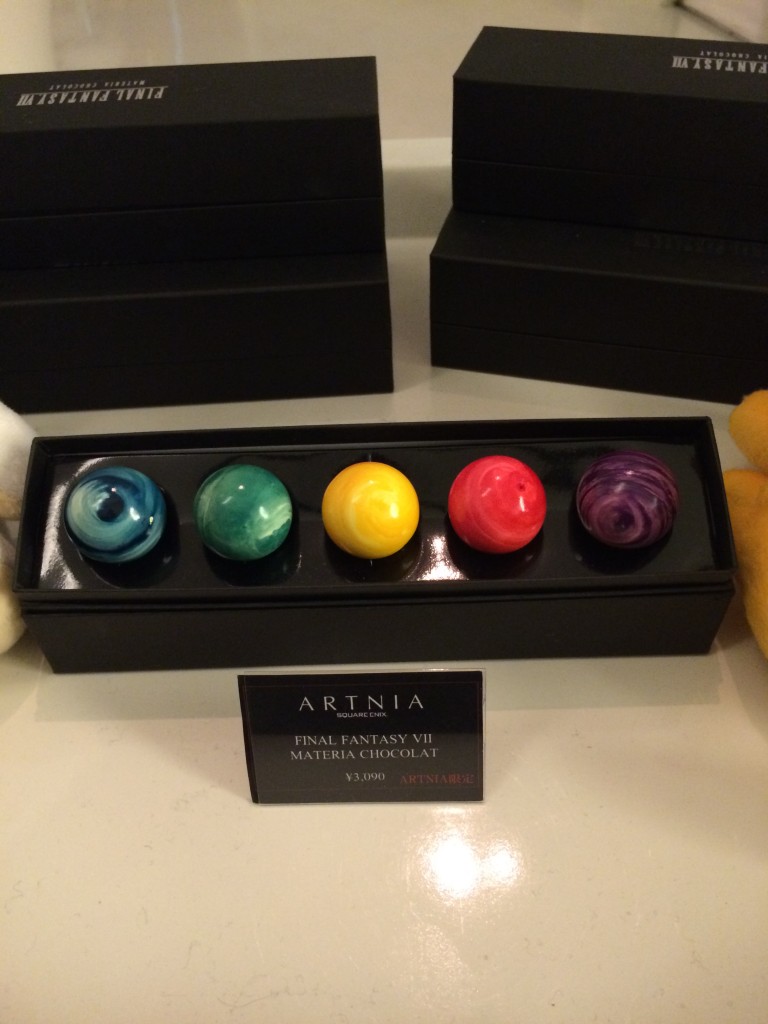 To be totally honest, ARTNIA was a cool visit and only recommended for die hard Square-Enix fans. It is by no means a necessity to visit when you are in Japan and especially not worth planning a trip over. The coolest thing maybe at ARTNIA is the Materia fountain in the side room, but other than that unless you are visiting Shinjuku this place can be easily ignored. 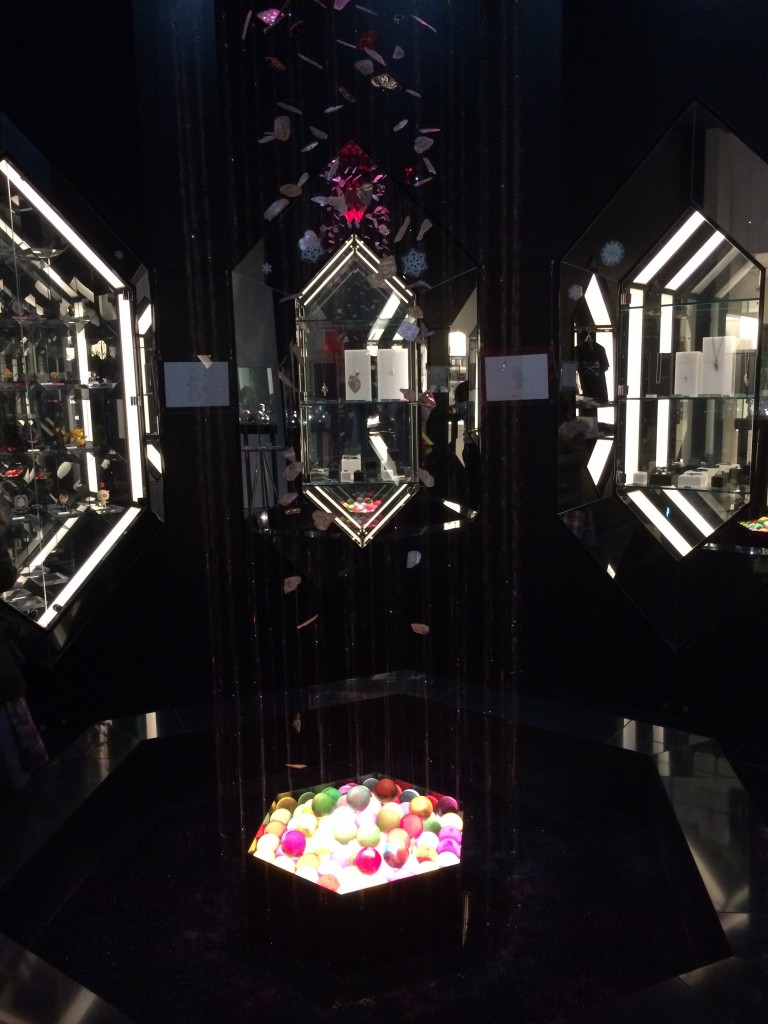 Until next time! I hope everyone liked this first Away Mission post, let me know what you think. If you have questions or comments about this, feel free to post them below!